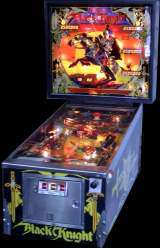 Black Knight introduced 'Magna-Save' and the Bonus Ball concept where the player with the highest score won additional seconds of free play. BK was also the first game ever that had a split level or 'two level' playfield. Magna-Save was a feature where a user could press a button on either side and magnets would prevent the ball from draining via that outlane. It would stop and hold the ball and drop it into the inlane. The user had to perform some task to re-enable Magna-Save.

Comments from the designer : Black Knight was the first game ever to employ faceted inserts (the transparent inlaid plastic windows) in the playfield. My design was a simple eight-sided 'Jewel Look', but insert texturing progressed from there to many different designs, finally settling on refracting radial lines originating at the center of round and rectangular inserts and from points of arrows and lightning bolts, etc.

A Black Knight unit appears in the 1987 movie, 'Superman IV - The Quest for Peace'.

* Mystery Score : When the ball goes through the left flipper return lane (which may be assisted by Magna-Save), the center ramp is lit for a short time for Mystery Score. The Mystery Score is awarded upon completion of the center ramp when lit, and awards a random value of 20,000 to 99,000 points (Contrary to today's hyper-inflated-score games, this is a significant award).

* Spinner : When the ball goes through the right flipper return lane (which may also be assisted by Magna-Save), the spinner is lit for a short time for 5,000 points per spin. A well-placed shot through the spinner can award as much as 100,000 points!

* Bonus Multipliers : The turn-around on the lower playfield awards bonus multipliers. When all bonus multipliers have been attained (2X, 3X, 4X, 5X), and bonus value is at maximum, the bonus lights in the 'sword' on the lower playfield will animate and 'scroll'. The bell will ring each time additional bonus-awarding targets are made after this point (flipper return lanes, outlanes, and drop target bank completion).

* Bonus Ball : If 2 or more players are in the game, the player with the higher score at the end of the game gets a 30 second Bonus Ball (this feature, and it's time limit are adjustable- see Instruction Manual). 'Bonus Ball' is actually an unlimited number of balls available to the player, but only for the 30-second period. So you can lose the ball as often as you wish during Bonus Ball, and it will be replenished, until the 30 seconds has expired.
The goal during Bonus Ball is to complete all 4 drop target banks in the 30-second Bonus Ball time, in order to light the turn-around for Special. The turn-around must be completed to obtain the Special.