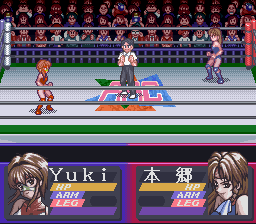 Players can guide one of five female wrestlers in the story mode Champion Road. The Exhibition mode allows players to simulate singles, tag and 6-women tag team bouts. Also featuring a tournament and open league. The World Circuit has the player pick a team of five wrestlers, or create their own and taking on each of the other teams.

The Champion Road and World Circuit modes allows players to raise and train their chosen wrestler or team, including learning new moves and building parameters for both offense and defense.