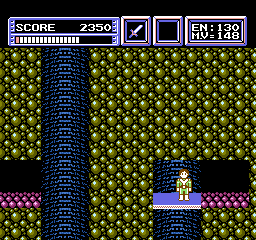 In the year 2081, the Earth was taken over by a group of hostile monsters under the command of the mysterious entity known as Increaser. A warrior named Dan has arrived from his time machine in the year 1999 in order to stop the invasion before it could spell devastation for the humans.

More emphasis is placed on exploration rather than on the actual killing of monsters. Enemies must be defeated to earn energy points; that can be spent on power-ups to improve the player's character. While starting out with a basic sword, other weapons can either be found or bought. A different variety of doors lead to a multitude of places. There is no linear order on how a stage progresses. There are five different areas; with deadly traps and treacherous surprises lurking around almost every room. Boss battles also must be fought before the level can be ended in a proper fashion.

As the game progresses, bosses (in addition to normal enemies) become more difficult to defeat. The size of the end-of-area bosses also become bigger as the player reaches the end of the game. All shopkeepers in the game use the Kansai dialect of Japanese; that is different from the Japanese used by people in Tokyo.

Players must also face a strict time limit that governs how powerful the ultimate enemy is when the player must confront it. Speed-running through the levels allow the players to confront to boss while it's weak. Taking the time to gather more powerful items will force the player to confront a more powerful opponent at the end of each level.