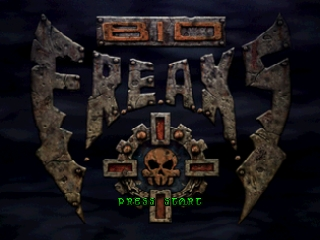 Each of the eight Bio F.R.E.A.K.S. (short for Biological Flying, Robotic Enhanced Armored Killing Synthoid) is armed to the high-tech teeth with bio-mechanical enhancements, including machine guns, grenade launchers and energy weapons. Each fighter has 20 or more special moves. In addition to the standard kicks, punches and projectile attacks, there will also be mid-bout fatalities, instant death moves and mutilations, which allow you to disarm your opponent -- literally. You have the option of allowing limbs to regrow during a bout.

Developer Saffire has pumped up this Mature-rated game with clever touches. Particularly messy moves may splatter the screen with Bio F.R.E.A.K. internal lubricating fluid, otherwise known as blood. Bio F.R.E.A.K.S. also features excellent training features, including an option-rich Practice mode. During a regular bout, you can elect to have the game automatically pause and give you a hint.

Most of the spacious arenas have unique hazards, such as red-hot lava pits and radioactive sludge, that can sap your fighter's energy as surely as a blow to the silicon solar plexus. The characters can fly, hover and land on one of the ledges built into most of the nine spacious arenas.

The ability to fly and fight from different levels opens all-new possibilities for strategy and mayhem, including attacks that can only be launched while aloft. It's this fast and furious airborne action that lifts Bio F.R.E.A.K.S. head and shoulders above your standard tournament fighter.