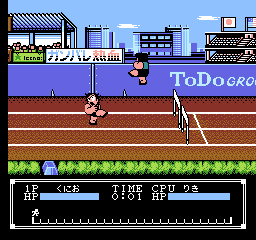 The game has four different teams to choose from, as well as a 5th computer-controlled team. Each team have five members each with their own strengths and weaknesses, making some better suited to certain events than others. Before each event, players have the opportunity to go shopping in the mall to buy power-ups for their characters. These items are paid for through the various medals that each team achieve as they progress through the challenge, but since the winner of the challenge is the team that collects the most medals overall, players must be fairly judicious in how much they spend.

There are two types of events in the game: individual events (Hammer Throw and Roof Top Jumping) and head-to-head events (400 Meter Hurdles, Swimming and Fighting). In individual events, each team takes turn individually and ranking is determined by who gets the most points. The head-to-head events take place under a single elimination tournament format, in which one player against another in a series of heats. The player who successfully defeats both of his opponents will get to compete against a member of Team Thornley for first place.

The game can be played by up to four players. Since there's never more than two teams competing at the same time, the third and fourth player can play simply by alternating between the two controllers. Thus, a four player adapter is not required, unlike other Kunio-kun games.