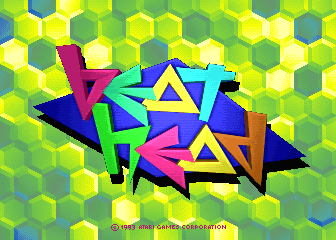 Beat Head has nothing remotely resembling Sprites or M.O.s., the hardware is a fairly naive bitmap, although it is implemented in VRAM, which allows, e.g. fast copies to reduce the CPU needed for static content.

Beat Head is the only Atari Coin-Op game to derive its 'time base' from the audio, and to do so uses a rarely used feature of CPU/Audio communication. A bug there would not affect any other game, and would manifest in Beat Head as timeouts and 'jerks' as the video was re-sync'd to the audio.

At the time, Atari were very keen to fund 'unusual' game concepts, such as "Toobin'" and Beat Head was one of those chosen. However, the game mechanic was incredibly repetitive and once you'd beaten 5 opponents, not much really changed. The reason for the very limited number of 'waves' is that the game did not get past a 'short field-test' stage. It was intended to be out only a few days. Atari had a pretty bad rep in those days, which showed in the cash box. And Beat Head had fairly powerful enemies within Atari, so it was killed at a very preliminary stage of the program. It certainly was never intended to be so limited.

The phrase 'Stella on Steroids' on the POST screen is a reference to the old Atari VCS, codenamed 'Stella'.
SOURCES
Game's ROM.