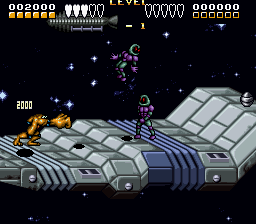 Extra fighters
--------------
Hold Up + A + B, then press Start at the player selection screen. Five, instead of three, fighters will be in reserve. Note: This code must be entered again at the continue screen.

Defeating the third Boss
------------------------
Play through the third level with roper and reach the Boss. Duck when he lifts up his gun, then attack once, or if possible, twice. Watch out for the butt of his gun. Keep on repeating this until he is defeated.

Defeat most bosses
------------------
When fighting Bosses, use the head-butt or flying kick move (Forward, Forward, B), then run back to the other side of the screen. Then, repeat this process. Your character will be able to beat most Bosses easily. For the Boss on the rocket, play as a Double Dragon, then hold Down and press B when near. Try to keep him in the air.

Extra lives
-----------
Start a two player game and play all the way to the end of level 1-1. Do not enter level 1-2 yet. Instead, turn on player two and use up all of his lives. Continue the game as player two, then repeat this process until all of player two's continues are used. Then, continue the game as player one. However, if all the pods on Level 1-1 were broken, you will have eight more lives and will have earned more through the points awarded while defeating player two. Two more lives can be obtained by going through level 1-1 again.

Extra points
------------
In World 3, at most of the points where you climb down the rope, you can gain extra points. If you kick the arrow pointing down, you get 100 points. To do this, as soon as you throw the rope keep pressing Attack and your character should kick the arrow the other way. Also, you can kick the crows multiple times if you have good timing. As they are bouncing back toward you from the wall, kick at them again.