A great fighting game with seven selectables characters plus hidden characters, among them a female character named Kica, who is a master of martial arts. The game featuring a varied scenarios, and stand out for a great anime intro and great sound. 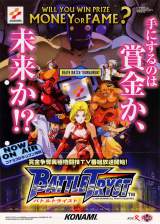