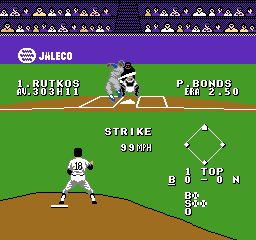 It might be, it could be, it is - the best baseball game ever for the NES!

America's NES baseball favorite has extended the regular season to include 130 games and a seven game final series. More fun, action and excitement than ever before! Take to the field with larger players. Play defense from an outfielder's point of view. Manage your team based on their individual speed and stamina ratings. One or two player action with voice, action and graphics so real you can't take your eye off the ball.

This season play to win it all, with Bases Loaded 4!