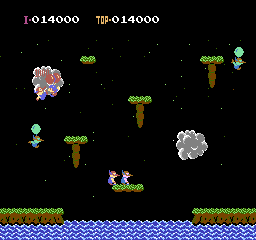 Balloon Fight is a single/fixed screen action game by Nintendo and basically modeled on Williams's arcade game Joust originally released in 1982. The player takes control of a floating character equipped with a helmet and two balloons tied to his back, and the action buttons allow him to quickly flap his arms, and to fly like a bird and defy gravity. The goal of each stage is fairly simple - our atypical hero must fly around the screen and clear all the rival balloon fighters. As he hits them from above and pops their balloons, they slowly parachute to the ground and must be kicked into the water, and this before they even get a chance to inflate another balloon and burst into battle again. Once an enemy is defeated and sinks to his doom, a bubble slowly floats up and can be collected for points. Of course the player is not immune to enemy attacks, and if one of his balloon pops, then his ability to fly becomes greatly restricted, and one more hit sends him plunging into the water. And that's not all, storm clouds are dotted around each stage and start shooting lightning bolts if the player lingers too long in a single level. Furthermore, one of the most dangerous challenges of all is the large hungry fish that lives in the water - if the player (or an enemy) happens to fly too close to the bottom of the screen, the predatory fish will try to gobble them in one bite. Finally, a bonus stage awaits the player every three levels, in which he has to pop twenty balloons within a time limit for bonus points. The game includes a simultaneous two-player mode as well as a single-player game called 'Balloon Trip', in which the goal is to fly forward, avoid lightning bolts and collect balloons for points.

Balloon Fight is based off of the game "Joust".

Nintendo also released a Game & Watch version of the same name, it is based on the NES version's Balloon Trip Mode. The protagonist of it is a Balloon Fighter, 'Balloon Man' (according to the manual). Unlike Balloon Fighters, Balloon Man uses a rocket suit instead of flapping his hands to elevate while holding balloons.

In "WarioWare - Smooth Moves" (Nintendo Wii), there is a minigame functioning as a 3-D version of the balloon trip in Balloon Fight.

Balloon Fighter and Flipper trophies are obtainable in "Super Smash Bros. Melee" (Nintendo GameCube), and the Flipper is also a usable item. The original background music for the Balloon trip in Balloon Fight can be heard in Melee's Icicle Mountain stage as alternate music.

The giant fish makes a cameo appearance in "Super Smash Bros. Brawl" (Nintendo Wii). It appears on the Ice Climber-based stage, the Summit, in which it tries to attack the players from the sea.

A single-player game, in the Wii U game "Nintendo Land", (2012) called 'Balloon Trip Breeze', is a tribute to Balloon Fight.