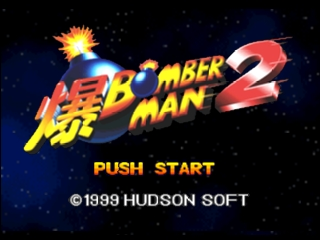 When you've been blowing up bad guys for as long as Bomberman, you cease to be self-conscious about the color of your cyber suit. Nintendo Power Source is pleased to announce that Bomberman has returned to Nintendo 64 for a third action-packed adventure -- pink gloves and all.

After his successful exploits in Baku Bomberman and Bomberman Hero, Bomberman was enjoying a much-needed vacation at the luxurious Hot Springs Planet Ksa2. His relaxation session was cut short, though, when his Bomber Craft drifted too close to a black hole created by a power-crazed evil doer named Rukifellth.

Bomberman discovers that Rukifellth and his BHB Army have enslaved peaceful planets with powerful Gravity Generators, in a quest to discover seven powerful Stones. Once again, Bomberman is charged with the task of saving Bomber Planet by beating the BHB Army into submission and recovering the seven Stones before Rukifellth can take over the entire galaxy.

As soon as you begin your quest in the bowels of the Lost Planet, you'll quickly realize that The Second Attack is the best of Bomberman's N64 adventures. The gameplay is very similar to Baku Bomberman, but an improved camera perspective greatly improves the gameplay.

The game features seven planets for Bomberman to liberate, plus a final stage set on Rukifellth's Warship. On each planet, Bomberman must destroy a Gravity Generator and defeat one of Rukifellth's Astral Knights. To accomplish these tasks, players will have to explode multitudes of enemies and solve complex puzzles.

Each time Bomberman defeats an Astral Knight, he recovers a Stone which allows him to use a new type of bomb. In addition to blowing up crates and enemies, Bomberman uses the special powers of different bombs to solve puzzles. Here's a sneak peek at Bomberman's new and improved arsenal:
* Fire Bomb: This is Bomberman's classic weapon, which explodes in four different directions
* Ice Bomb: The Ice Bomb freezes water, objects and enemies
* Wind Bomb: Use the Wind Bomb to blow Bomberman over impassable terrain
* Lightning Bomb: This weapon is used to fry circuitry in mechanized or robotic equipment
* Shadow Bomb: This is similar to the Fire Bomb, but is much more powerful

Also, Bomberman can collect a wide variety of items on each planet by destroying objects or enemies. These items allow Bomberman to perform special tasks like kicking or picking up bombs. A new feature in The Second Attack is that Bomberman can purchase these items at a special Merchant Ship before landing on a planet. The Merchant Ship also sells game hints and other rare treasures.

No hero is complete without a sidekick, and this time Bomberman is blessed with a freaky little fellow named Pommy to do his dirty work. Pommy, a Kirby-esque creature that hatches from an egg early in the game, helps Bomberman by knocking down enemies and providing comic relief.

Pommy is a hungry little bugger, and if you want to keep it happy you have to collect food which can be found on each planet. If you find enough food, Pommy will evolve into a more powerful creature. You can actually determine how Pommy evolves by carefully choosing which food you collect. If you feed Pommy nothing but meat, for example, it will grow more strong. If you feed it only vegetables, it evolves into a more intelligent creature.

Excluding his witty comments, the best thing about Pommy is that it can be controlled by a second player. Pommy is forced to follow Bomberman, but the second player controlling the creature can attack enemies and assist in the adventure. Due to his timid disposition, Pommy is not able to help Bomberman in a Gravity Generator room or while fighting an Astral Knight.

After nearly being crucified for omitting a multiplayer mode in Bomberman Hero, Hudson Soft has responded to the criticism with a rich four-player Battle Mode. There are eight different Battle Arenas to choose from, and a variety of ways to play:
* Survival: This is the classic Bomberman battle. The last player standing wins
* Battle Royal: The player who defeats the most competitors within a specific amount of time wins
* King & Knights: Assign players to teams, and see who can survive the longest
* Key Trial: This mode uses a split-screen. The first player to locate two hidden Keys is the winner
* Score Attack: Attack objects or other players to collect as many coins as possible

Initially, Survival Mode is the only multiplayer game available. To unlock new modes of play, single players must compete in the Challenge Battle Mode. In this mode, a single player battles multiple CPU-controlled characters in an increasingly difficult set of competitions.

Like the original, Baku Bomberman 2 allows gamers to collect Custom Parts in the Story Mode for use in Battle Mode. Decorative Custom Parts are very well hidden, and normally require some serious puzzle-solving to collect.

Perfected play control and the presence of a pummeling Battle Mode make Baku Bomberman 2 one of the hottest games of the year.