Back to the Future [Model NES-FU-USA] 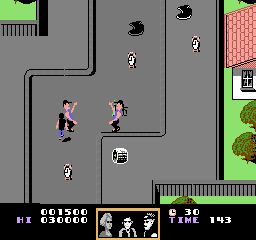 You are Marty McFly, just a typical senoir at Hill Valley High. But after getting behind the wheel of a nuclear-powered sports car turned time machine, you find yourself in the year 1955 where you've accidentally tampered with history. Now it must be corrected. You must somehow make sure that teenagers Lorraine Baines and George McFly, the two kids that will eventually grow up and become your parents fall in love before the photo of your family fades away and you're left with nothing to come home to.

It won't be easy. You'll have to protect George from Biff and his gang of bullies while doing your best to keep them from beating you up instead. To complicate things, Lorraine has a crush on you, so you will have to dodge her advances while trying to figure out a way to get George and her to kiss at the school dance. Time is wasting and even if you manage to put all the pieces in place, there is still no guarantee that you'll ever get back. It will all come down to one brief moment in time when the past, present, and future will meet.

Released in September 1989 in USA.

The music that plays throughout the game is actually 'The Power of Love' sped up.

According to Bob Gale, co-creator of the Back to the Future series, the game's publisher LJN didn't want any input from the film's creators, however promised to show it to them when it was ready. Gale disagreed with what was shown to him and wanted it changed but was told that it was too late. Gale later told fans to not purchase it because of how bad it was.