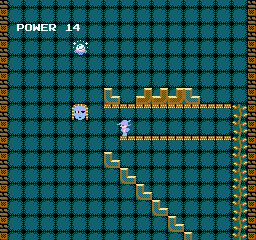 Babel no Tou is an action puzzle game developed and published by Namco in 1986. The player assumes the role of Ind? B?gunain, an adventurer and archaeologist on a mission to explore the Tower of Babel in an attempt to find the lost hanging gardens of Babylon. But to succeed, he must navigate through 64 treacherous rooms and solve all the mysteries of the tall tower. Although Indy can start his journey from any stage, only 16 are available at first and all the others are password protected. In a nutshell, the gameplay is rather simple - each level has an exit door that Indy must reach in order to progress to the next round, and this is where the true essence of the game lies. Our explorer must lift and move L-Shaped blocks around, and stack them up to create stairs. Once he has picked up a block, he can orient it differently so it faces a direction that is more suited to a particular situation. In typical puzzle game fashion, the gameplay becomes a lot more complicated as the game progresses - removing a supporting block can make a whole staircase momentarily tremble and collapse, or blocks can crush Indy if he falls while carrying one. He also comes with a limited Power level which decreases as he moves blocks around, and acts as a kind of time limit. Enemies also quickly appear on the playfield and add an element of challenge to the mix - koumori bats simply fly around , priests of Uru are a lot smarter and constantly hunt down Indy (and they keep regenerating), and the Baberuzu golems are made out of stone and can create new blocks. Various items also occasionally appear - vases and crowns are turned in for points, jewels make Indy temporary invincible, lamps give him the ability to walk through blocks, crystal balls unlock exit doors later in the game and the rare shooting stars increase Indy's speed. Interestingly, every eight floors, Indy enters an odd looking room - there, he must find a way to reveal one of the eight symbols later used to unlock the final level and to gain access to 64 extra floors.