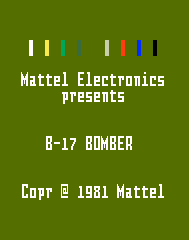 Pick a target, then fly to it. The voices of your fellow crew members tell you when and where enemy fighters and flak appear. When you hear a bandit's position, move to the machine gun where you can get a shot at the fighter. Over the target, aim bombsight and release bombs. Watch the fuel and don't stay too long: you've got to get back to England to refuel, rearm and repair your bomber. Fly as many missions as you can, for the best game score.

At the beginning of the development, the game was called 'Air Traffic Controller' and 'Flying Fortress'.

Early in the development of the game, John and Kai, just for fun, used Atari logos to mark targets on the map of Europe. No one noticed this when the marketing department displayed the unfinished game at the January 1982 Consumer Electronics Show. No one, that is, except the Atari legal team, who swooped into the Mattel booth and forced them to stop demonstrating the game.

The gauges screen was not intended to be in the game. It was a debugging tool, used by the programmers to check on the value of certain variables during the game. John liked it so much it became part of the finished product. But since this screen was never intended to be seen by the public, it wasn't coded to check for values overflowing, resulting in non-numeric characters showing up on the counters.

Press SCORE (ENTER) any time during the game to see net points for the current mission and the game so far. You get 2 points for each enemy fighter you hit, and target scores as indicated on Preview displays. Bonus points are awarded for completing each mission.

Points are deducted for hits on the B-17. There's a HEAVY score penalty if you bomb England!