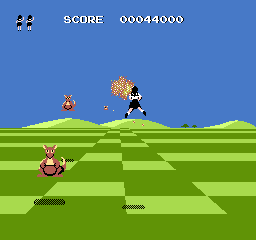 Attack Animal Gakuen is a 3D shooter published by Pony Canyon. Animals have gone mad and they have carried out series of hate-fueled attacks all over the world. But a ray of hope still shines - a young school girl named Nokko Win was blessed, for unknown reasons, with supernatural powers and the incredible ability to fly. Only dressed with a school uniform and a mini-skirt, she embarks on a perilous mission in an attempt to defeat the hostile invaders and rescue her kidnapped friend. Of course she doesn't go around unarmed and she is not afraid to do battle with a powerful and devastative rifle-blaster that she carries and fires effortlessly. Attack Animal Gakuen is obviously heavily based on Sega's classic Space Harrier where alien enemies were replaced by all sorts of gone-mad animals, from bouncing kangaroos, crawling turtles to flying Jelly Fish, rocket-propelled gators or giant Koalas. Although the game doesn't feature any power-ups per se, groups of small statues appear in each level and can be collected for enhanced abilities. They allow Nokko to fire more bullets at once, move faster or increase the strength of her weapon. However, although these power-ups don't disappear after a certain period of time (and can be accumulated), they do vanish when Nokko loses a life. Attack Animal Gakuen consists of six stages and supports Nintendo's 3-D glasses (the 3D mode can be activated at any time during the game by pressing 'Select').

The title of this game translates from Japanese as 'Attack Animal Academy'.

* Level Select: At the title screen, press and hold Left and Down on the second controller. Press B on the same controller to set the level you want to start from. Lives (symbolized by small Nokko icons) should appear in the upper left corner of the screen, next to the score (picture on the right) - they indicate which level the game will start from. To start the game, press A and Start on the first controller.