This machine was a new style of game with added strategy. The game will begin on every press of the start button, overprinted symbols on the reels award 27 way entry to the feature. Once in the feature players move around the continuous trail. Spin positions located on the corner of the board awards spins of the feature reels. The reels contains cash awards which are accumulated on the L.E.D.cash pot display. Features are activated via Shots and the values increase as the player progresses up the levels. Cash Adds to the 15 position cash trail.

Bonus nudges allow players to use their strategy to nudge in reel wins or manipulate the reels for higher wins from the features. Bonus Nudges can also be used to fill the fruit column and activate the Sky’s The Limit feature for big cash prizes. Match 3 Vivid Stripes on the win-line to activate Vivid Features. 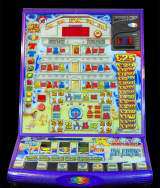