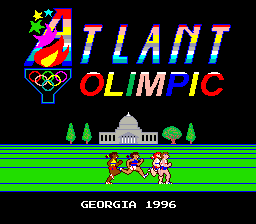 A multi-event sport game - an update of Konami's 1983 classic, "Track and Field" - released to tie in with the 1996 Olympic Games, held in Atlanta, USA.

This bootleg was only released in Italy. The only notable differences between this and the original "Track & Field" lie in a number of small changes to the background graphics (to tie the game in with Atlanta), and a greater visual variety of athletes; with both male and female competitors represented; the male athletes now sporting beards instead of the moustaches of the original.

There is also a greater variety in the athletes' skin tones on the game's title screen, giving the game a more 'international' flavour.