Nintendo NES cart. published 33 years ago by SNK of America 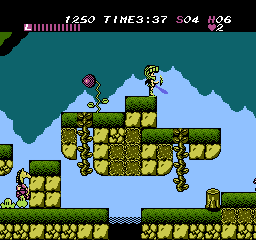 A fantasy world of boundless adventure awaits you!

I am ATHENA. They call me the Goddess of Wisdom, but I have grown weary of my dull life in the castle. The Fantasy World beyond the castle walls beckons to me! Strange and fearsome creatures will attack me at every turn. But I will find weapons along the way: a ball and chain, a bow and arrow, or a mighty sword will be my defense! In the Fantasy World, I can put on wings and take to the sky, or become a mermaid to explore the ocean depths. There, the Goddess of Wisdom can become the Princess of Victory!

Released in August 1987 in the USA.
SOURCES
Game's ROM.