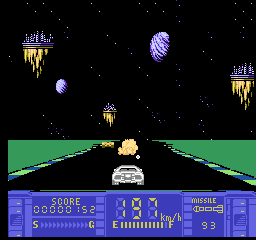 Astro Fang is a car racing/shooter game developed and published by A-Wave. The RS-121 planet used to be home of a prosperous and flourishing advanced civilization. However, a string of disasters horrifically transformed the planet and turned it into a devastated and barren wasteland. Among the ruins of the ancient civilization lies a long highway called the Black Line, and a mysterious and forgotten legend that remains unsolved to this day. The player takes control of Raib?, an elite car driver, who has decided to put the legend to the test. On board his Astro Fang Supermachine, he must drive on the cursed highway, push other marauders off the road or hit them with a limited amount of missiles. The Astro Fang includes a rather unusual feature - pressing the down button squeezes the car and makes it a lot slimmer and more compact, allowing the player to successfully navigate through obstacles and enemy cars. The Astro Fang also comes with a limited amount of fuel and repair shops are scattered around the game for quick repairs or to replenish fuel or weapon supplies. Special items can also be purchased there, such as barriers, snow tires (used in later stages) and the fang shield (pushes off enemies on contact). Finally, several bonus items can be collected along the way, and they range from blue icons (extra fuel), red icons (shield) and white icons (fang shield). Astro Fang consists of six large stages, each punctuated by a boss fight - but the Black Line is a complex maze made of many junctions and a map is provided before each level to guide the player through the game.