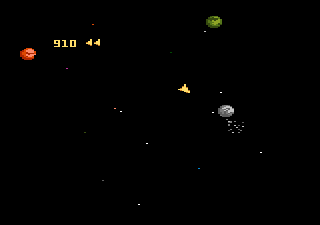 Asteroids crowd in on your ship in waves from all corners of the screen. When you empty the screen of asteroids, a new wave crowds in. Each wave you face is more difficult to destroy than the last.

Watch out for Alien Robot Saucers! They are armed with special photon lasers that destroy anything they hit under all battle conditions. Both small and large saucers explode when hit. (There are no saucers in the Novice level.)

A reserve fleet of three ships stands ready in hyperspace. Each time an asteroid hits you, destroying your ship, a reserve ship appears in the starting position. When the screen is clear of passing asteroids, your new ship begins play. This continues until all your ships are destroyed.

To escape from the asteroid cloud, pull back on the controller handle to warp into hyperspace -- but watch out! You can be warped back at any time, or the warp could destroy your ship.

The highest score of the game is displayed on the ending screen and updated as higher scores are tallied in later games. The highest score remains on screen until you turn off your console.

This variation is for one player, or two players alternating.

Competition Asteroids:
Two players appear on screen at the same time. Your ship is vulnerable to shots fired by the other player. Both players are supplied with ships as long as either player has ships in reserve. You benefit by helping the other player stay alive.

Team Asteroids:
Two players appear on screen at the same time and share reserve ships. Your photon shots pass through the other player's ships without disabling them.