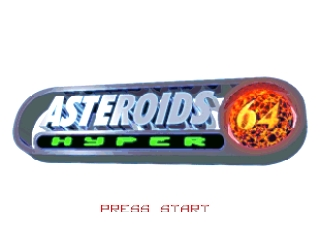 Before stunning graphics, stereo sound and cinematic cut-scenes revolutionized the gaming industry, arcade games had only one asset to rely on: gameplay. The original arcade classic Asteroids had the most primitive graphics imaginable, but it remains as fun to play today as the day it premiered thanks to simple but incredibly addictive gameplay.

Crave Entertainment has given us an Asteroids game for the 90s, beefing up the classic formula with updated graphics and numerous multiplayer modes.

Asteroids Hyper 64 contains 50 levels spread out over five zones. Although the time-tested concept remains the same (blast everything on the screen), players are armed with new power-ups and have to defeat a boss at the end of each level. Four new types of asteroids are featured in the game, including: