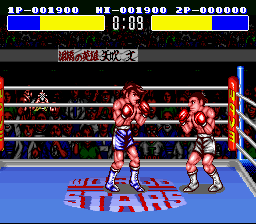 Ashita No Joe is a boxing game published by K Amusement and released in 1992. The player takes the role of Joe Yabuki and must fight his way through an intense boxing tournament. Seven opponents stand between him and victory and each pro-boxer is tougher to beat than the last. Two buttons are used throughout the game - one throws basic straight punches and directional button combinations allows Joe to use uppercuts and hooks. The second button puts Joe in guard and lets him block attacks. Life bars on top of the screen display the players current status and the winner is decided through Knock Out on the third fall. A two-player mode is available.