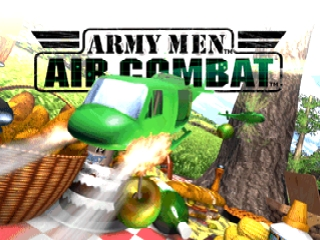 3DO first introduced N64 gamers to the world of injection-molded warfare with the green vs. tan action found in Army Men: Sarge's Heroes. Now, they are ready to take a fresh look at this epic struggle with a helicopter action game that's dripping with nostalgia and packed with creativity.

Like Sarge's Heroes, Army Men: Air Combat takes place both in the Army Men world and our world as well. The game contains a total of 16 missions, most of which unfold in our over-sized world of gargantuan dog dishes and nuclear-strength cherry bombs. When the war moves to the Army Men world, though, the environments are scaled properly to Army Men proportions.

A solid visual package takes gamers through a variety of environments, including a backyard scene, a beach area and an arctic expanse. Background graphics and special effects are solid, convincingly recreating a surreal combination of fantasy action within a realistic world.

While most helicopter combat games focus heavily on resource management and strategic elements, 3D0's internal development team decided to make this game immediately accessible to gamers of all skill levels. The controller configuration is very simple, and you'll never have to worry about picking up a darn gas tank.

Instead, the game satisfies players with creative gameplay elements never seen before in a helicopter game. For example, players can use the winch to pick up a chicken leg, then use it as a mega bomb by dropping it on enemy ground troops. If you're particularly creative, you can drop the chicken leg near a tan installment so that it attracts hostile ants to the enemy's stronghold.

Each level contains unique mission objectives to complete, like protecting a toy train or destroying R.C. cars owned by the tan army. These objectives are fairly easy to figure out, and basically just provide an excuse to blast everything in sight.

When you're designing a game based on little green army men, you don't have to be too concerned with helicopter physics. As a result, the development team was free to take liberties with Newton's laws and create a flight game with forgiving and responsive play control.

Chopper control occasionally feels a bit sensitive, but the helicopter is placed in the proper position to give players a clear view of enemy targets. By delivering great play control and the same nostalgic fun found in Sarge's Heroes, Air Combat is positioning itself to be one heck of an action game.

Don't forget that 3DO is the company that gave the world the breakthrough multiplayer action found in BattleTanx and BattleTanx 2. They hope to build on this rep by adding a two-player co-op feature and a competitive four-player mode in Army Men: Air Combat.

If you enjoyed Army Men: Sarge's Heroes, you're going to fall in love with Air Combat. As long as toy companies continue to manufacture little plastic men frozen in barbaric contortions of rage, 3DO will have no problem whipping up storylines to accompany a strong franchise that continues to grow and improve.