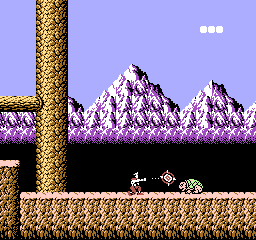 Argos no Senshi is an action/adventure game based on the arcade game originally released by Tecmo in 1986. The evil king Raig? (aka 'Ligar') and his army of fierce beasts have attacked and invaded the kingdom of Arig?ru (aka 'Argool'). The people's only hope is to summon a legendary warrior from the past who is now destined to destroy the impending evil, to find the five Indora fighting gods and to restore peace to the land. He is equipped with his signature Diskarmor, a large spiked disk attached to the end of a chain that can both damage enemies and collect items from afar. Enemies drop two kind of items when killed - life potions and star stones. The stones are at the core of the gameplay and increase the warrior's spiritual points (or 'mind strength') - they serve as experience and as an opportunity to enhance some of his abilities. A status sub-screen can be accessed at anytime during the game by pressing the start button. There, spiritual points can be used to activate three kind of spells - The Power Up spell (3 SPs) increases the reach and speed of the Diskarmor, the Attack Spell (5 SPs) activates a special power that allows the warrior to inflict damage to all enemies on screen and the Recovery Spell (7 SPs) refills his life-bar. Argos no Senshi also incorporates role playing elements and our hero gets gradually stronger as he fights more enemies. Interestingly, the game also switches to a top-down view when the warrior enters the vast valley of Garloz, and special doors and temples lead to side-scrolling levels and to the game's fearsome bosses. Finally, special items are hidden throughout the expansive game world such as the Grappling Hook (that allows Rygar to gain access to previously unreachable platforms) or the Crossbow (can shoot ropes across chasms). Finally, although Argus no Senshi has no save or password features, it has infinite continues and revives the player at the nearest checkpoint upon death.