Area 88 is a horizontally-scrolling shoot-em-up and is based on the Manga series of the same name. The game features characters from the original Manga and their mission is to battle their way through enemy-packed levels to stop a terrorist group known as 'Project 4'.

Players chose to fly one of three jet fighters: an A-10 Thunderbolt, a F-14 tomcat and an F-20 tiger Shark. The player's jet fighter has an energy bar that decreases every time it takes damage. The fighter is destroyed once the energy bar is depleted.

Before entering a stage, players enter a shop and are given the opportunity to purchase special weapons or improved defences. Money for use in the shop is earned by destroying enemy planes and vehicles during play and when the stage is completed, any unused weapons are converted back into money.

The game consists of ten stages plus a bonus stage. 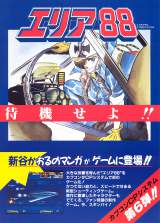