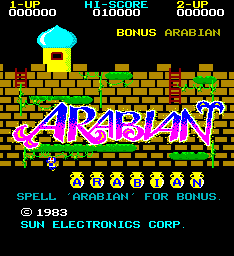 You'll have 1001 hours of fun with the ARABIAN upright game! You are the adventurous Arabian prince, and your goal is to rescue the princess from her palace. Use the joystick control and the KICK button to move through perilous passages. Sail the seas, crawl in caves, and fly magic carpets - you'll be challenged by 4 increasingly hard waves of play! Score points on the way for picking up the letters in A-R-A-B-I-A-N, and get a bonus if you pick them up in order!

Arabian is a 'video book' with a happy ending! The attract mode introduces the story, and animated storybook 'pages' let you experience the Arabian Prince's adventures. Use the 8-position joystick to jump, super-jump, walk, crawl, or climb in all directions. Tap either KICK button (are you right- or left-handed?) to kick your enemies out of the way.

The player controls a young Arabian Prince who must rescue his Princess from the castle tower where she is being held prisoner. Evil Genies in brass jugs, swooping Rocs, and purple ghostly creatures called Oscars will try to stop him along the way. The Prince scores points for kicking Oscars or Rocs, picking up lettered jugs, or spelling A-R-A-B-I-A-N. The Prince loses a life when he's hit by a smokeball, falls off a ledge, flying carpet or vine, or gets caught (touched) by a Genie, Oscar, or Roc.

The Prince must successfully complete 4 levels to rescue the Princess (4 levels or 'pages' equals 1 section). Each level is introduced with the turning of a page, which shows a distant view of the upcoming playfield. Each playfield has 7 lettered jugs that must be picked up before the player can advance to the next level, but he must avoid or KICK evil Genies, Oscars, and Rocs that will try to stop him.

Page 1. Page l turns, revealing a ship. The Prince must work his way to the crow's nest at the top of the mast before the vessel reaches the shore. As he climbs up the rigging, Rocs and Oscars dive at him in an attempt to knock him down. The Prince must KICK them out of the way to survive. While contending with these rascals, he must also try to collect all the jugs with letters on them. Beware! The jugs hold devilish Genies which can appear at any time and throw smokeballs at the Prince. Once a Genie has materialized, the Prince's kicking power cannot be used against him and he is unable to collect the jug so he should avoid the Genie. However, the Prince may collect the jug while the Genie is in smoke. When the Arabian has collected all the jugs and reaches the top of the ship, Page 2 introduces the second level of the story.

Page 2. Now the Arabian has arrived on shore. To reach the Princess he must complete a cave maze under the cliff. Low-hanging rocks and climbing vines force him to crawl and climb. The Prince must still dodge Rocs, Oscars, and the Genie's smokeballs. And he must still collect the brass jugs. When he reaches the top of the cave, he must try to collect the letter N jug.

Page 3. Now the Arabian Prince must scale the walls of the castle. As flying carpets whiz by, the Arabian must jump from one to the next, taking care he isn't knocked off his present perch by another carpet flying too closely He can duck to avoid them, but his timing has to be precise or he will take a tumble down to the ground. He must still dodge Rocs, Oscars, and the Genie's smokeballs. The player must beware - sometimes a pair will merge into one super Roc bird or super Oscar!

Page 4. The Prince has at last entered the castle. The Princess beckons him from high in the tower. To reach her, he must ride atop some flying carpets and pull himself up ropes - all the while collecting the brass jugs and kicking meddlesome Rocs and Oscars. When he reaches his loving and grateful Princess, the 2 fly happily into the sunset on a magic carpet.

Once the player has taken the Arabian through a section (all 4 levels), the next section begins. But the action gets faster, the Genies are angrier and fling more smokeballs, and there are more intelligent and challenging Rocs and Oscars. Even the brass jugs are rearranged so that it becomes more difficult for the player to spell A-R-A-B-I-A-N in order.