The object of the game is survival. You gain points by moving the ant with the joystick from the colony to the food on the surface and back to the colony. However, when the ant breaks through the surface, he exposes himself to the deadly anteater.

The ant moves faster than the eater when traveling in tunnels so you can adjust you distance for laying the delayed eggs by retracing your steps. You have three ants at the start of the game. Returning all four cubes to the colony completes the set and gives you an extra ant. On the second set, you must evade two eaters and on the third set, three eaters. The speed of the game increases with each set. 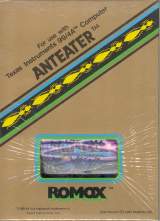