You play the part of Annabel Gray, a Southern belle during the time of the American Civil War. Ever since you were a child your ambition was to become a nurse. When you were eighteen you gained a place in the nursing corps. After the first shots were fired at Fort Sumter, announcing to a despondent America the start of the American Civil War, you were in Washinton, where you remain fulfilling the demanding duties of a war nurse.

During the spring of 1863, shortly after the battle of Fredericksburg, you received a letter smuggled across Union lines from South Carolina.

The letter from your mother gives you great cause for concern. She says that the war has taken a great toll on South Carolina, and General Sherman's army has caused widespread devastation. Most of the animals have either been taken for the Confederate cause or have been stolen. Your family plantation Five Oaks has been producing a poor crop of cotton and only a few workers remain. The others have gone north after Abraham Lincoln's declaration of Emancipation.

She says that because of the poor crop of cotton, she is unable to pay the taxes on Five Oaks and that the family plantation, home for three generations, may have to be sold.

Your mother asks you to return home to try and find a way of raising the money, in order to save Five Oaks. The journey home will be fraught with danger. You have to travel through Union territory, before you can reach Virginia. In Richmond, you will be able to board a train for Charleston in South Carolina. 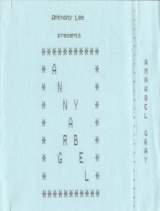