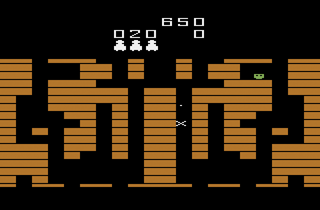 Unreleased prototype. This is one of the games being done for the AndroMan robot. AndroMan (later to be renamed AtariMan) was supposed to be harvesting minerals on the moon (a plastic map with a lunar landscape called a Gamescape). He could move over bar codes on the map (which signified mines) and then the game would show him enter the mine, being attacked by 'moon aliens' along the way. He could drop bombs to kill them. If he got hit, he would jerk around or make some noise (which is why the game hangs). After getting further into the mine, the corridor is shown from a first person 3D view, and AndroMan is attacked by flying, circular shaped 'moon bats'. He can shoot at them by using the joystick to control the cursor on the screen. When he makes it to the end, he gets the resources in the mine. He then has to move on the map to return the resources to the base, and so on.