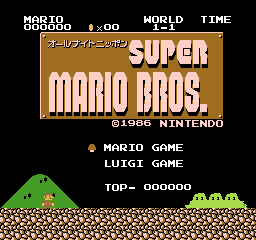 This game is a very rare version of Super Mario Bros. with graphics based upon the popular Japanese radio show All Night Nippon. The game, which was only released in Japan for the Famicom Disk System, was a special promotional version that was given away by the show in December 1986.

The creators altered the sprites of the enemies, mushroom retainers, and other characters to look like famous Japanese music idols, recording artists, and DJs as well as other people related to All-Night Nippon. They also used the same slightly upgraded graphics and physics that Super Mario Bros. The Lost Levels used.