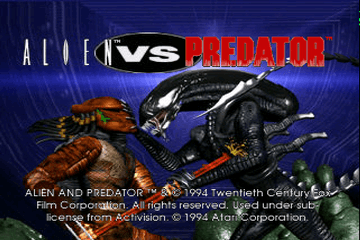 Alien Vs. Predator is a tactical simulator depicting the events following the fall of Camp Golgotha Colonial Marine Training Base to a group of xenomorphs (aliens) not yet fully classified. Limited data from the incident also allow for reasonably extrapolated simulations from the viewpoints of the two alien groups believed to have participated in the incident. The data contained herein is considered top secret as of this release, and any duplication, distribution or display is punishable by courtmartial with a maximum penalty not to exceed seven years imprisonment in the Yuggoth penal colony, SYS Aldeberan IV. (USCMC, 53622a)

* Freeze Alien Queen (just outside the Queen's Lair): Save game, then reload. Queen will be frozen and can be damaged. She'll die when you unfreeze her by walking through entrance.

* Shortcut to Alien Ending: Enter the 'Banana Stops' cheat. Make a cocoon and when it is mature, get your alien killed (don't enable God mode, obviously). As the screen fades dark and the cocoon is hatching, press Option+A/B (for level up/down) and the screen will fade to the Alien Ending.