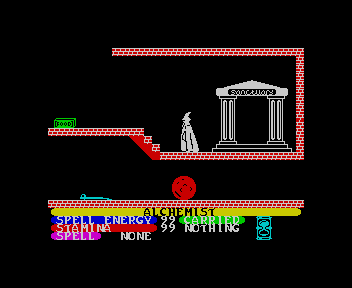 You the most skilled Alchemist on Earth have been summoned to do battle with the Evil Warlock who is terrorizing the land. As you enter his dread castle you wonder if even your formidable powers will be enough to defeat this evil force.

Your only chance of success is to find the four sections of magic scroll that have been ingeniously hidden in this forboding place. Only when the four mystic pieces are in your possesion will you be able to render the Warlock powerless by using his own "Spell of Destruction" against him.

As you fight your way relentlesly onward, every evil creature and force at the Warlocks disposal is unleashed against you.; you hurl lightning bolt after lightning bolt against these powers of darkness, your energy becomes depleted, you must find food to rekindle your ebbing power. As the obstacles become more and more awesome will you have the energy at your command to perform the transformation spell which will turn you into a mighty Golden Eagle and enalbe you to overcome many of the diabolical traps set for by the Warlock.

Your objectives are clear, assemble the magic scroll and banish evil into oblivion for eternity.