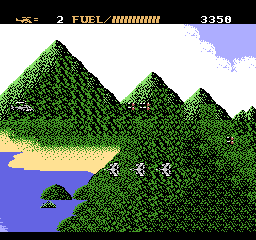 Airwolf is an horizontal shooter based on the popular American television series aired in the 1980s. The player takes control of a super helicopter codenamed Airwolf, a military aircraft capable of supersonic speeds and stealth capabilities, and embarks on perilous undercover missions. Before each stage, the player is prompted to pick one primary air-weapon and a secondary ground-bomb. The primary weapon comes in three types - the Chain Gun fires straight ahead and at an angle, the Falcon fires small missiles and the Cannon. The same principle applies to ground-bombs and they come in three flavors - Red-Eye (bombs), Copperhead (missiles) and Hellfire (bullets). Pow icons are occasionally left behind enemy formations - they increase the equipped weapon's fire power and improve its firing rate. Finally, the Airwolf can fly at supersonic speed for a short amount of time and becomes invulnerable when it does. However, this technique consumes fuel and must be used with caution. Each level is essentially a linear path toward a large boss - interestingly, boss fights use a first-person view as opposed to side scrolling and losing even one means game over. In addition, the player is rewarded with a password after each completed level , however they are not used to save his progress but to unlock the game's ending - so they must be carefully written down and are randomly generated for each play session.