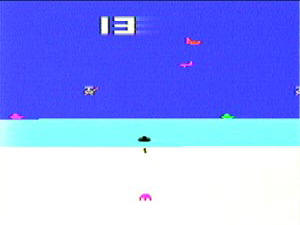 Features 20 different game variants. Eight variants feature air battles, the other twelve are sea battles. Games generally involve controlling a submarine, destroyer or airplane each trying to drop bombs or fire torpedoes in an attempt to destroy each other. Different variants allow for one or two players.