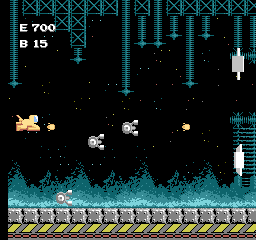 Air Fortress is a side scrolling shooter/action game by HAL Laboratory. In the very distant Cromat Galaxy, the inhabitants of planet Farmel are faced with an impending doom - eight mysterious and monstrous alien fortresses (named "Air Fortresses") now hurl towards their home world at considerable speed, and their true motives are undoubtedly dubious. The Federal Bureau of Galactic Government decides to send a lone attack commando on the most desperate mission imaginable. The space marine Hal Bailman (codename ID 82593), on board his small but heavily armed Lightbrasner (aka Light Blaster) ship, must first fly dangerously close to the surface of each fortress. During this initial phase, the player must destroy waves or enemy ships, avoid obstacles such as platforms or floating asteroids, and eventually locate the air lock that gives access to the inner structure of the monstrous ship. Once inside, Hal leaves his Light Blaster behind and ventures deep within the core body of the impenetrable stronghold with his jet pack. His final objective is to find and ultimately destroy the central reactor, and to reach a second escape Light Blaster before the fortress goes to oblivion. Hal comes equipped with a Light Beam Blaster and a limited amount of energy. Capsules are scattered around the game and replenish Hal's energy (E), or recharge his powerful Crash Beam (B). The later is a particularly explosive weapon that he can use in desperate situations, and although Light Beams can be fired indefinitely, the Crash Beam comes in limited quantities and must be periodically recharged. Energy is a very important part of the gameplay - inside each fortress, Hal continuously loses energy when he fires a weapon, uses his jet pack or receives damages, and energy cells help him regain some of it back. But most importantly, they extend his maximum energy, and all the energy items collected before entering the air lock determine the player's power level inside the fortress. However, once inside, although Hal can rest in elevator shafts to regain some energy, power lost from enemy damage is never restored. Air Fortress is single player only, and the progression is saved through a simple four-character password system.

* Second quest passwords: Completing the game unlocks a new set of fortresses. However, although they are directly available in the American version, you must first enter three special codes in this Japanese version (first GYUW, then AGOG and OOON). The game will then start at the first stage. You must then die and go back to the title screen (which will now be green) and enter one of the second quest passwords.
Level 1 - ABE4
Level 2 - 11NA
Level 3 - 8AJI
Level 4 - TOBI
Level 5 - NDA4
Level 6 - MA1K
Level 7 - DOMO
Level 8 - 7NDE