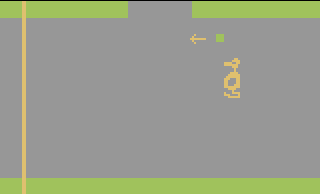 This is no easy task, as the Evil Magician has created three Dragons to hinder you in your quest for the Golden Chalice. There is Yorgie, the Yellow Dragon, who is just plain mean; there is Grundle, the Green Dragon, who is mean and ferocious; and there is Rhindle, the Red Dragon, who is the most ferocious of all. Rhindle is also the fastest Dragon and is the most difficult to outmaneuver.

There are three castles in the Kingdom; the White Castle, the Black Castle, and the Golden Castle. Each castle has a Gate over the entrance. The Gate can be opened with the corresponding colored Key. Inside each Castle are rooms(or dungeons, depending at which Skill Level you are playing).

The Castles are separated by rooms, pathways, and labyrinths. Common to all the Skill Levels is the Blue Labyrinth through which you must find your way to the Black Castle. Skill Levels 2 and 3 have a more complicated Kingdom.