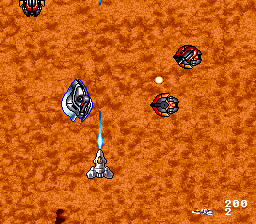 Acrobat Mission was an arcade game by UPL originally released in 1991 and licensed by Taito. The Super Famicom version was the only home port of the game - however, it has some noticeable differences. The original game features two pilots to choose from ('Jet' and 'Nova') and a two simultaneous player mode. Some graphics were slightly altered such as the first boss which is red and grey in the arcade game. Weapon effects and especially special attacks were toned down (the Wide beam covers the whole screen when fully charged up in the arcade version!). The Super Famicom is also a bit harder as it always sends the player back to the beginning of the stage when he dies whereas the arcade game will respawn him before the area's boss. Finally, most of the (rather psychedelic) arcade end sequence was removed from the Super Famicom version and replaced by some text and a gameplay video.