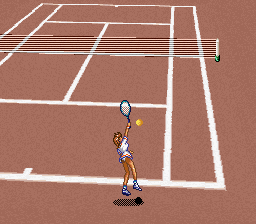 Ace Wo Nerae is a 3-D tennis game by Nippon Telenet based on a popular Japanese anime from the 70s (itself based on a shoujo Japanese manga series by Sumika Yamamoto). The player takes control of Hiromi Oka, a young and cute rookie tennis player. Even if she's still studying in High School (she's supposed to be 15 years old), she aims, through determination and hard work, to become the greatest tennis player of all time - the Ace Player ! The game offers three modes - versus (up to four players), training (for first-timers) and story. As expected, the story mode gets the player to compete against a selection of premiership tennis players and cutscenes slowly unfold the story. During any of the play modes, Ace Wo Nerae uses the Super Famicom's graphics capabilities to produce a 3D representation of the tennis court (set to a fixed overhead view for the versus mode) which cleverly simulates an actual 3D moving camera. Each button of the controller pad is linked to a type of swing and players can therefore use a large selection of traditional tennis moves. Matches can be quite long and a password system is used to save the game's progress throughout the story mode.