Sinclair ZX Spectrum cass. published 35 years ago by US Gold 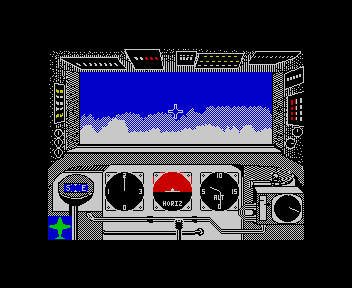 A Unique Opportunity to Experience the Magic of Flight and Exhiliration of Aerial Combat.

"No British aircraft will ever bomb Berlin", Luftwaffe cheif Herman Goering had often boasted. But in the middle of a Nazi anniversary speech in January, 1943, his listeners duck for cover as a carefully timed raid of RAF Mosquitos strikes Berlin in broad daylight.

Ace of Aces captures the spirit and puts you in the cockpit of the Mosquito, maverick RAF fighter bomber of World War II. Down the Nazi bombers, sink the U-boats, outrun the V-1 rockets and stop the enemy trains. Choose your weapons and fuel wisely - once you're out on mission, there's no going back. To become Ace of Aces, you must complete all missions successfully.

1 From the moment you zoom through the clouds in a scrap with Nazi fighters to the heart-stopping second you spot the U-boats of Kiel, the defence of the Allied world is in your hands. Are you equal to the challenge?

2 Once you master a few flying tricks in your speed bomber, you tackle strategy: selecting the right number of machine guns, rockets and bombs to achieve your mission.

3 Your intercom flashes 'warning' on your starboard engine. An enemy fighter attack has left your Rolls Royce engine in flames. Cut back your boost and throttle. Hit the extinguisher before the fire spreads. What does it take to be an Ace? From you, legendary British price and guts.