Four hundred years ago, to the day, the four heroes Kalynthia defeated and destroyed Bronagh the prince of Evil. Pendugmahle, the mighty creator of Bronagh, has returned to take his revenge upon Kalynthia and its peoples for the death of his protege. The direct descendants of Dowegen and the leaders of the ancients knew that the only hope for the kingdom of Kalynthia was the return of the ancient heroes. After much effort and persuasion the Order of Arbitrion was reconvened in an attempt to recall the Sword of Life. From the corners of a dank cellar, a few pairs of dark red glistening eyes made up the audience to the few who gathered to form the conjurers circle. A deep glow began form the centre of the circle, which soon became a brilliant ball of light from which the great Sword suddenly burst forth. The ancient order had been drained of life and it has been left up to you to use the sword to choose the heroes which you must lead to defeat Pendugmalhe and his minions. 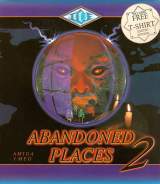