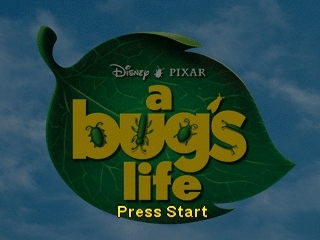 Help Flik prove that you don't need to be a hulk to be a hero.

Activision brings Flik's life story to the N64 in a 3-D adventure that closely follows the storyline of Disney/Pixar's successful animated movie.

Players can travel with Flik through 15 levels of insect-infested insanity in a heroic effort to put Hopper's gang of Grasshoppers on ice.
Colorfully named N64 newcomer Traveler's Tales and Disney Interactive co-developed A Bug's Life with extensive help from animation powerhouse Pixar. By working so closely with the film's creators, the development team has created a video game that accurately follows the plot of the movie. Luckily for gamers, Flik has a knack for finding trouble.

Pixar's presence has produced colorful visuals similar to those found in the movie, but naturally it was unable to recreate the impact of buttery-smooth big screen animation.

If you don't approach the game expecting state-of-the-art computer animation, you'll be pleased with the game's authentic character design and Flik's fluid movements. On the other leg, the game's frequent pop-up and pixelated special effects may make you want to squash something.

Flik's adventure begins just before the oppressive Grasshoppers arrive at the colony. The anxious ant spends the rest of the game working his antennae to the exoskeleton. The game contains three basic kinds of levels, in which Flik must either find an exit, recover specific items, or defeat a boss.
Each level contains optional objectives, which provide challenges for players of all different skill levels. In the second level, for example, Flik must work his way through the tunnels of his home while avoiding Hopper's angry army. While younger players can simply focus on finding the exit, advanced players will want to solve puzzles and thoroughly explore until they have found all of a level's hidden items.

Many of the game's puzzles involve planting different types of seeds to grow platforms. Brown seeds sprout into mushrooms that double as trampolines, while green seeds grow into vines that can be used as ladders. Since seed cultivation is the most challenging aspect of A Bug's Life, you may want to read our Seed Almanac to learn the basics.

It's a big world out there, and a group of ghastly Grasshoppers could make any ant drop his seeds and run. The thin circumference of Flik's arm may prevent him from throwing a punch, but he's more than capable of flinging berries at enemies. Flik begins his quest with an unlimited supply of fruit, but he'll have to find more powerful breeds of berries to exterminate bigger bugs.

A Bug's Life gradually presents players with more complex puzzles in a gentle learning curve that should accommodate all players. While players will normally know what to do, they will sometimes find it difficult to complete tasks due to pesky play control.

Camera problems are responsible for the bulk of the play control issues, but it can also be difficult to control Flik while jumping from one platform to another. A bit of practice takes care of most platform perils, and manually moving the camera can prevent many a slip.

Projectile weapons can be tough to control in a 3-D environment, but Flik has been blessed with an excellent aiming system. Each of the ant's berries is equipped with a homing device that makes it difficult to miss an enemy, and as you find more powerful berries you can lock onto enemies at a greater distance.

In addition to the normal adventure, A Bug's Life contains a Challenge mode exclusively available on the Nintendo 64. In all, there are 60 challenges, in which Flik must race against the clock performing tasks ranging from collecting grain to destroying enemies. You can save your best times to a Controller Pak.

Even though A Bug's Life is missing a multiplayer mode, the challenges should keep players working their thoraxes long after the Adventure mode has been completed. This game will be a blast for Flik's fans, and even those who haven't seen the movie will be entertained by the colorful characters and the unique sensation of viewing the world from a bug's perspective. When else could you get the chance to walk around in a soda bottle?