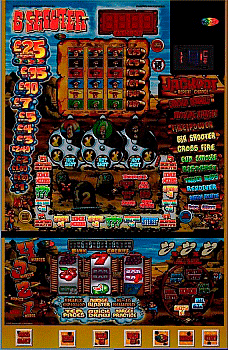 The game will begin on every press of the start button, overprinted symbols on the reels award 27-way entry to the feature. Once in the feature players Hi-Lo gamble to move around the lapping board, incrementing the cash and feature columns. The Hi-Lo reel also contains 4 bonus positions which activate 1 of 6 bonuses in the bonus panel. Bonus nudges allow players to use their strategy to nudge in reel wins or manipulate the reels for higher wins from the features. The Super-shots positions on the 4 corners of the trail spin the upper set reels which increment the top award panel like a bingo card. HOT SHOT positions step the reels to add to the feature award panel. Match 3 Vivid Stripes on the win-line to activate 1 of 6 Smokin' Features.