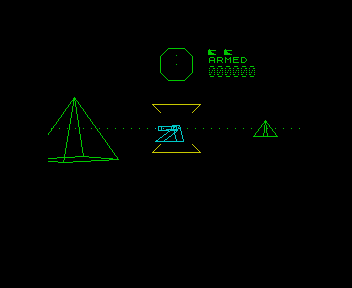 3D Combat Zone is a clone of the arcade game Battlezone by Atari. The game uses 3D wire frame graphics to render the enemy tanks, saucers and other objects. There are two types of tanks you can encounter, the first is typical cannon fodder but is still quite intelligent. The second type which you encounter later on is a lot faster, intelligent and harder to hit. Both tanks can fire back but the saucer cannot. The battlefield is also littered with pyramid shaped objects which are very useful to hide behind, but unfortunately this is so for the enemy tanks. Your tank is restricted to firing one bullet at a time and will reload when the shell either goes out of range or hits an object or tank. To help you locate the enemy there is a radar screen, this only picks up the vehicles and not the shells.