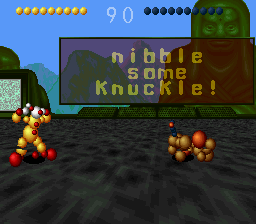 3D Ballz is an unusual fighting game developed by PF.Magic and published in Japan by Media Rings. Like any fighting game ought to, a list of playable fighters are available for the player to take control over - however, unlike most fighting games, they range from a a Caveman, a Ballerina to a Mad Clown and a Rhinoceros. All in all, the game features a grand total of eight characters and four different bosses. Interestingly, each character is built out of a set of colored balls that give an unusual 3-D feel to the game. Each fighter can punch and kick or use special moves directly related to their personality - for instance, the rhinoceros can charge right into his opponent and spear him with his horn, and the caveman can roll his opponent into a ball and hit him with his club as he would do with a baseball bat. Other special moves can be unleashed by pressing both shoulder buttons, or when two fighters enter close range combat. 3D Ballz also features a traditional versus mode where two players can fight head to head.