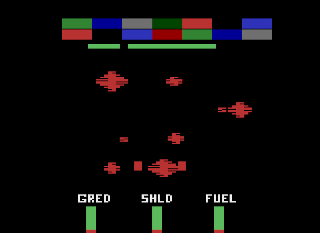 3-D Havoc is composed of two different stages (three if you count the ending as a stage). The first stage is a first person perspective shooter where you must shoot incoming asteroids… IN 3-D! Each asteroid that hits your ship causes your shields to drop a little. Once your shields fail your ship will begin to make sputtering sounds and move very slowly. However due to the incomplete nature of this prototype, it’s actually impossible to die in the game (it’s assumed that once your shields failed the next hit would be lethal). You can actually turn your shields off and on with the left difficulty switch (the top and bottom of the screen will be gray when the shields are up and black when they are down), but there’s no point in doing so. It’s unknown if the ability to turn the shields on and off is a deliberate choice (in the completed prototype turning off the shields may have conserved fuel or had some other benefit) or if this was simply a tool used to debug the game during development.

In addition to the shield gauge there are also a Gred gauge which measures how much ammo you have left and a Fuel gauge which measures, you guessed it, how much fuel you have left. If you run out of fuel your ship will stop moving and you’ll be a sitting duck for asteroids. This has an unintended consequence in that if you stop in a spot where you are unable to shoot asteroids (they can miss your ship completely in certain spots), you will never be able to complete the level and will be stuck. In a similar manner the Gred gauge can also run out leaving you with no ammo and no way to complete the level. However both the Fuel and Gred gauges deplete so slowly you’d almost have to be trying to run out of fuel or ammo to have this happen. In case you’re wondering, no one is sure what Gred stands for. It might be short for Grenades (your shots look more like bullets or grenades than lasers), but this is pure speculation on my part. There also appears to be a bar at the top of screen that might be yet another gauge of some sort, but it appears to be either non-functional in this prototype or simply some random eye-candy like the colored squares above it.

After shooting a dozen or so asteroids you’ll be taken to the second stage which takes place in a tunnel of sorts. Here you must shoot down several enemy spacecraft before they can destroy your ship. After shooting down three or four ships, you’ll see a brief screen that says HERO with your crew cheering your apparent asteroid shooting prowess. After this you’ll be briefly taken back to the second stage where you can shoot down two or three more ships before being booted back to the first stage. If you beat the first stage again you’ll see a large flying saucer with a number on it indicating your current level (you start on level 0). After which you’ll be taken to the next level of difficulty and all your systems will be given a recharge. It’s unknown if this repeating of the first and second stage before completing a level is a bug or if this is how it would have worked in the final version.