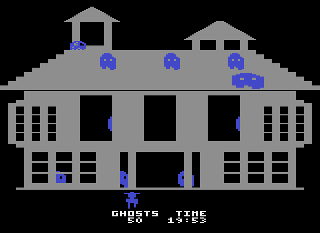 Upon starting the game you'll be presented with a nice splash screen featuring a rather large 3-D Ghost. After admiring the artwork for a few seconds you’ll be taken to first stage. The goal of the first stage is clear the outside of the mansion of all the ghosts. This is accomplished by shooting them with your ‘photobeam’ when you are lined up with the ghost. However you can’t just stand under a ghost and shoot, you must be on the same ‘plane’ as they are (your character will go from 2-D to 3-D when changing planes). Although this may sound complicated, all you’re really doing is moving your photobeam’s targeting sight up and down (the higher your photobeam is aimed the more ‘3-D’ you get). This is accomplished by simply pushing up or down. You can see where you are currently aiming by pressing the fire button and skull and crossbones will appear where you shot.

Although the screen shows that you must destroy 50 ghosts in 20 minutes, you’ll automatically move to the next stage after a few minutes. The second stage takes place in a graveyard, but your goal and controls are the same. One thing to note is that there are fewer ghosts on this stage and they’re spread further out. Unfortunately since this stage has no collision detection (or sound for that matter) it cannot be played. Your only choice to go back to the menu and select another stage. It’s assumed that had the game been completed you would be moved to the next stage after killing the requisite number of ghosts. Interestingly it appears that your character can move a bit forward down the path (up to the first set of ghosts), and will be knocked back if they touch him. Perhaps you were meant to slowly go down the road after shooting each batch of ghosts? On a side note this stage features a really nice 3-D perspective that actually works pretty well, unlike the other stages.

The third stage takes place in the portal to the ghost world (which looks suspiciously like a 3-D cube). Here you must shoot as many ghosts as you can before they escape out into the world. This is easier said than done as they move very fast and are not in any pattern. This stage also has your shots 'move' inwards towards the center of the screen to simulate shooting into the distance, this can make it hard to line up your shots. Unfortunately this stage doesn’t have an ending so it will continue forever until you give up. Apparently there is some code for an ending tune but it’s not accessible in this prototype.

Much like 3-D Genesis and 3-D Havoc, the big draw of 3-D Ghost Attack was the 3-D effect. Attempting to play the game without the benefit of red/blue glasses is nearly impossible as the screen is constantly switching back and forth between red and blue frames that make up the 3-D perspective. Even with the proper glasses, the 3-D effect is pretty bad as the 2600 just doesn’t have the resolution to do it properly. Still, it would have been a decent gimmick at the time and probably sold pretty well given 3-D’s brief resurgence in popularity at the time. Unlike the other two 3-D games (3-D Havok and 3-D Genesis) the 3-D effect cannot be turned off. It's unknown if this feature was a planned for the final version of the game or not.