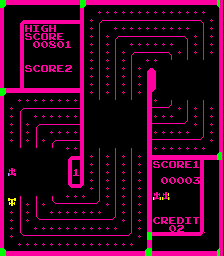 Rolling Crash is a 2-D maze racing game with changes to add to the variety of play. You control your car through the maze to pick up the dots while at the same time avoiding the car, or cars, that are constantly trying to ram you. Successfully get through one maze and many more await you. This is good practice for freeway driving in the big city. 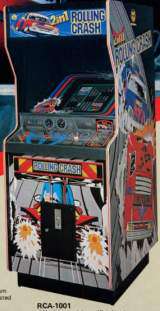 Rolling Crash varies from the "Head-On" games in three ways :
1) The game wraps around in a figure eight, making game play different in each part
2) If you run into the enemy car where you can change lanes, your car doesn't die but instead gets pushed over to another lane.
3) The dots actively slow down your car. This you can see as explosions.

* Always be aware of where the Jam Car(s) is/are located. They can only make one lane change at a time but that lane change may be into your lane.

* The faster you go, the fewer lanes you can cross. At full acceleration, you will only be able to change one lane at a time. In the earlier levels, this will be fine since you will only be dealing with one car. In the multiple Jam Car levels, this can be a very bad thing. Decelerate (take your finger off the accelerate button) to go across multiple lanes.

* Don't try to get all the dots on one of the lanes. You need to anticipate where your next move is well before you enter the lane change area since you cannot change lanes at any other time. Sometimes, on the earlier levels, it is best to do a staggered type dot pickup where you do lane one, change to lane two, to lane three, lane four, lane five, then back to lane one. If you time it right, the Jam Car or Cars will still be in the maze.