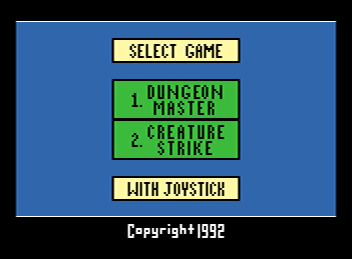 Dungeon Master
Toman is deep inside a dungeon laden with incredible treasures guarded by terrible monsters. Equipped with only a bow and arrow, he seeks the treasures as the monsters close in. Guide him through the dungeon chambers... but don't stop to count your treasure until you're through!

Creature Strike
Devastating waves of cosmic creatures attack from above. Blast them with your laser cannon. Careful! These foes are tricky. When hit, some split in two. They keep coming. The challenge never lets up as you fight back for the ultimate victory.