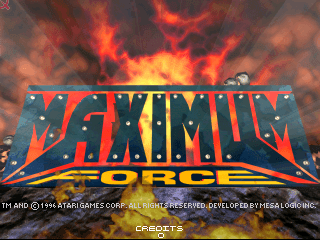 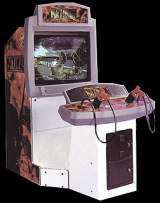 Maximum Force was released in February 1997.

This game was the second developed by Mesa Logic for Atari Games and has often been described as an unofficial sequel to "Area 51" (the real sequel being "Area 51 Site 4").

The game shares many similarities with "Area 51" (secret rooms, hard drive etc.) but uses a more sophisticated sprite overlay system, which allowed the interactive element to have the same number of colours as the video. Maximum Force uses a 16Bit stream for the main video (instead of 15bit for "Area 51"). There's about 50 minutes of video on the 2 GB hard drive. However, despite the more realistic sprites, innocents still do not disappear when shot and actual gore content is far less than that of, say, Mortal Kombat - Maximum Force was a product of the era where games such as Doom were still being blamed for violent shootings in America and Atari Games wanted to maintain their 'good guy' image.

Robert Johnson holds the official record for this game with 707,700 points.

* Duck Hunt : To play the duck hunt bonus game, shoot the posters that hang from columns in the second mission.

* Chicken Hunt : To play the chicken hunt bonus game, shoot all of the buttons in the elevator on the second mission.

* The Horse Race : Shoot out all of the 'art' paintings in mission 2 and you will get into the horse race.